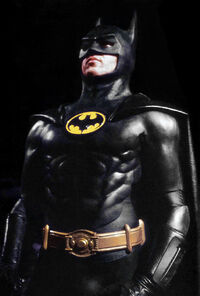 Batman is a caped crusader and perhaps the world's greatest detective. He appears in the films Batman, Batman Returns, Batman Forever and Batman and Robin.

Several action figures were produced of this version under Kenner's The Dark Knight Series for the first two films. Succeeding figures took on pre-posed designs as was common in the 90's.

Community content is available under CC-BY-SA unless otherwise noted.
Advertisement